OFDM is a special multi-carrier modulation technology, which uses the orthogonality between carriers to further improve the spectrum utilization rate, and can resist narrow-band interference and multi-path fading. Although the basic principles of OFDM technology have been proposed long ago, the level of devices at that time limited its application. In recent years, with the development of technology and device level, as well as the requirements for high speed and reliable transmission, the application of OFDM technology has become more and more widespread. Standards such as DAB, DVB-T, HiperLAN-II in Europe, ISDB-T in Japan, 802.1a, AD-SL, VDSL, etc. in the world all adopt OFDM technology, which is used in wireless broadband access and fourth-generation mobile communications In the meantime, OFDM technology will become another core technology after CDMA technology.

OFDM transmits serial data in parallel through multiple orthogonal subcarriers, which can increase the width of the symbol, reduce the frequency band occupied by a single symbol, resist frequency-selective fading caused by multipath, and can effectively overcome inter-symbol crosstalk ( 1S ", reducing the system's requirements for equalization technology, suitable for high-speed data transmission in multipath environments and fading channels, and high channel utilization, which is particularly important in wireless environments with limited spectrum resources. At present, OFDM technologies are all It can be realized by FFY technology, so the structure of the system is simplified. However, OFDM technology also has shortcomings. First, it is sensitive to frequency offset and requires higher synchronization technology. Secondly, the peak-to-average power ratio of OFDM signal is large The non-linear sensitivity in the system requires special techniques to reduce the peak-to-average power ratio.

In the process of realizing OFDM technology, it is necessary to make reasonable design according to the corresponding channel conditions and system requirements in order to give full play to its advantages. The selection of system parameters, the design of pilot and synchronization schemes, and the combined use of equalization and coding techniques all need to be optimized before implementation. Combined with the author's work, through the analysis and research of the key OFDM technology, the basic framework of OFDM system simulation is proposed.

The basic idea of â€‹â€‹OFDM is to modulate serial data in parallel on multiple orthogonal subcarriers, which can reduce the symbol rate of each subcarrier, increase the symbol period of the symbol, and improve the system's resistance to fading and interference. At the same time, due to the orthogonality of each sub-carrier, the spectrum utilization rate is greatly improved, so it is very suitable for high-speed transmission in fading mobile occasions.

The basic block diagram of the OFDM transmission system is shown in Figure 1. 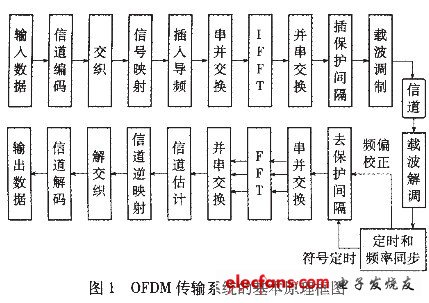 The following is a combination of the key links in the OFDM transmission system to analyze and study the key technologies in its implementation, which can further draw out the problems that need to be paid attention to in the simulation process, thus giving a basic simulation framework.

In the wireless fading channel, the influence of multipath leads to the delay spread of the received signal, so the waveform of one symbol may extend to the period of other symbols, causing intersymbol crosstalk (1S1), which is also the main cause of the degradation of transmission performance the reason. To avoid ISI, the symbol period should be greater than the delay spread caused by the multipath effect. In practice, it should be greater than the maximum multipath delay.

In OFDM systems, the effect of ISI is reduced by reducing the symbol rate. At the same time, a guard interval can be added between each OFDM symbol to further eliminate residual ISI. The current effective method is to insert cyclic expansion (prefix and suffix, sometimes It can only be inserted into the cyclic prefix). The length of the cyclic extension depends on the delay extension of the channel. At the same time, the cyclic extension has a more important role, that is, it can achieve system synchronization. The schematic diagram of cyclic expansion is shown in Figure 2.

Here, by using a window function [RN (n)] with a length of / V, the transmission signal spectrum can be better controlled, the influence of frequency offset can be reduced, and the difficulty of synchronization can be reduced.

In an OFDM system, because the symbol width is relatively wide, the system is not very sensitive to timing offset, and ISI is well suppressed. However, due to the small subcarrier spacing, it is more sensitive to frequency offset, and phase noise also greatly damages the system.

Timing offset, or delay distortion of the envelope, does not destroy the orthogonality of the subcarriers. The timing phase offset only causes the rotation of all subcarriers. Appropriate channel estimation can effectively eliminate these effects. The sampling frequency error will produce a time-varying timing offset, resulting in a time-varying phase change, and will also introduce a small amount of inter-carrier interference (ICI). In practice, the ICI introduced due to timing offset is very small, when Es / No is 20dB , Only about 0.01dB.

Phase noise has two basic effects. One is the introduction of a random phase variable to all subcarriers. Tracking techniques and differential detection can be used to reduce the effects of common phase errors. Second, it also attracts a certain amount of ICI because The phase error causes the subcarrier spacing to no longer be exactly 1 / T.

Frequency offset is more harmful in OFDM system, it will cause ICI and destroy the orthogonality of sub-carriers. ISI and ICI are contradictory, one decreases and the other increases. Since a certain amount of ISI can be tolerated during system design, ICI can be reduced as much as possible in order to reduce the difficulty of system synchronization. Residual ISI can be achieved by simply Elimination of the balance. The frequency offset causes the interval period of the FFT to be no longer an integer, so ICI will be generated after the conversion. It can be seen from the data that the maximum frequency deviation acceptable for OFDM technology is related to the difference between the channel signal-to-noise ratio and the effective signal-to-noise ratio. Generally, the frequency accuracy must reach 1% -2% of the frequency interval.

Since synchronization is a difficult point in OFDM technology, many people have also proposed many OFDM synchronization algorithms, mainly for cyclic expansion and special training sequences and pilot signals. Among them, ESPRIT using singular value decomposition is more commonly used. Synchronization algorithm and ML estimation algorithm, although the ESPRIT algorithm has high estimation accuracy, but the calculation is complicated and the calculation amount is large, and the ML algorithm uses the cyclic prefix of the OFDM signal to effectively estimate the joint frequency offset and time offset of the OFDM signal Compared with the ESPRIT algorithm, its calculation is much smaller.

There are many researches on the synchronization algorithm of OFDM technology. It is necessary to design and study according to the specific system, and it is feasible to use a variety of algorithm fusion for joint estimation.