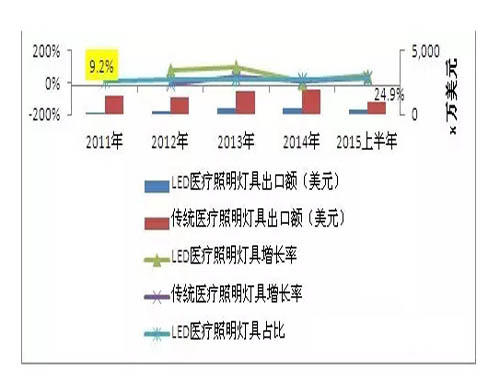 In the rapid development of the lighting industry today, LED light sources are rapidly developing in areas such as smart lighting, plant lighting, landscape lighting, and medical lighting with their characteristics of fixed point, orientation, high brightness, high purity spectrum, cold light, adjustable color temperature, and longevity. Although compared to the entire LED lighting market, the output value of LED medical lighting may be relatively small, but medical lighting belongs to medical devices. It has strict regulations and certification requirements. It requires strict technical and safety regulations, and it is in line with ordinary functional lighting. In comparison, the risk of technology is greater and the entry barrier is higher. With the emphasis on health care, medical rehabilitation, environmental protection and energy conservation, LED medical lighting will open up a new world in the domestic market.

Medical lighting products are specifically named as oral light, head light, surgical light, shadowless light, signal light, disinfection light, and film viewer according to their specific functions. The surgical shadowless lamp is an indispensable and important device for surgical site illumination. It requires the doctor to be able to best observe objects with different depths, sizes, and contrasts in the incision and body cavity; it is necessary to have both "no shadow" and "light". ". The traditional shadowless lamp generally adopts the low-priced tungsten halogen lamp as the light source, which is prone to problems such as improper filter, infrared heat radiation, and dryness of the patient's surgical area. The use of LED as the light source of the shadowless lamp can solve the above problems. With the improvement of medical lighting requirements, LED light sources have developed rapidly due to their special advantages and the prospects are bright.

It can be obtained by CSA Research. From 2011 to 2015, the total export volume of medical lighting in China has increased rapidly, from US$16 million in 2011 to US$25 million in 2014, and the export value has increased by nearly US$10 million. In 2013, exports accounted for more than 23 million U.S. dollars and the growth rate reached 44%. In the first half of 2015, the export volume of medical lighting lamps in China reached 13 million U.S. dollars, an increase of 34% from the first half of 2014.

Although the export volume of the entire LED industry has exceeded US$5 billion in exports in the previous year, the medical lighting industry is a very â€œfineâ€ industry. Its export value is very different from that of the entire LED lighting products. However, with the introduction of the new medical reform, the medical lighting industry will continue to maintain rapid growth under the promotion of medical insurance expansion and the establishment of a primary health care system.

LED plant grow lamp is a kind of artificial light source which takes LED(light-emitting diode) as the luminous body and meets the light conditions required by plant photosynthesis.


According to the type, belongs to the third generation of plant lighting lamps!


In the absence of daylight, the lamps can act as daylight, allowing plants to grow normally or better.