With the gradual popularization of DTMB applications, the complexity of urban ground wireless signal transmission has begun to manifest itself, and higher requirements have been placed on receiver chips. As the most critical part of the DTMB receiver, the performance of the receiving chip directly determines the receiving effect of the whole machine and the popularity of terrestrial digital TV. In March 2008, Hangzhou Guoxin took the lead in launching the first domestic three-mode demodulation receiver chip that integrates DTMB single-carrier/multi-carrier and cable digital TV. It has been widely used in Hong Kong, Hangzhou, Jingmen, Hunan and other places. The chip designed to meet the domestic receiving environment has sufficient experience and sufficient understanding.

This article refers to the address: http://

Advantages of the DTMB standard

As the most widely used terrestrial digital TV broadcasting standard in the world, DVB-T has a history of 13 years since its birth, and it is also the most widely used terrestrial digital TV standard in China before the DTMB standard. Although the technology of DVB-T is very mature, the requirements for digital TV reception in the past 10 years have changed a lot compared with the current, and the large-scale integrated circuit industry has experienced rapid development, making more advanced technologies available. Applied in the receiving chip. DTMB is a new generation of digital TV transmission standard with the following advantages compared to DVB-T:

1. Higher spectrum utilization. DTMB adopts TDS-OFDM modulation mode, which does not need to use pilots for channel estimation. Compared with DVB-T, the spectrum utilization rate is increased by about 10%, and more TV programs can be transmitted under the same transmission bandwidth.

2. Better signal coverage. Terrestrial digital TV uses wireless signal transmission, which is susceptible to signal attenuation and other wireless signals. The FEC (Forward Error Correction Code) in DTMB is a combination of LDPC (Low Density Parity Matrix Code) and BCH code, and has a lower signal to noise ratio threshold than DVB-T convolutional code and RS code combination. Therefore, the signal coverage at the same transmission power is greatly improved.

3. Better mobile reception and anti-interference ability. The multi-carrier mode subcarrier spacing of DTMB is equivalent to the 4K mode of DVB-T (applied to DVB-H). From the perspective of channel estimation, it is the maximum theoretical anti-Doppler frequency offset capability of Nyquist criterion. At around 900 Hz, it is converted at a signal frequency of 704 MHz, reaching a theoretical speed of more than 1,300 kilometers. In addition, because it has a maximum interweaving depth of 250ms, it also greatly improves the DTMB's ability to resist burst interference and shadow fading.

Compared with the DVB-T standard, the shortcoming of the DTMB standard is that DVB-T uses a cyclic prefix structure that can withstand echo interference of up to 224?s, while DTMB's multi-carrier mode can only be up to 125? s (frame mode 3). From the PN sequence feature analysis of the DTMB frame header, the reception performance is guaranteed to be optimal only when the echo length is less than 57.4 s (corresponding distance is 17.2 Km). If the echo length is greater than 57.4?s, the channel estimation has a maximum spreading gain of 20dB, but once the number of echoes increases (as shown in Figure 1), the interference between the echoes increases, and the gain due to channel estimation drops sharply. In the extreme case, even negative values â€‹â€‹may occur. DTMB's single-carrier mode uses time-domain equalization to eliminate echo effects and is less sensitive to echo length. It can combat near-300?s echo interference in our design. . 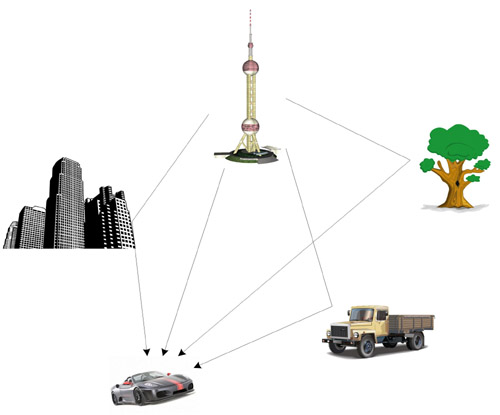 For most of the designers mentioned forward echo, multipath Doppler interference caused DTMB reception capacity to decline, according to our research, if all echo delay range is less than 57.4?s, use reasonable frame head area detection The algorithm, regardless of the characteristics of the echo distribution, the gain of the channel estimation is very high, at this time the signal coverage is mainly determined by the signal field strength. In general, the Doppler interference introduced by the vehicle movement does not cause the reception failure. After theoretical derivation and field test, when MFN (multi-frequency network) is adopted and the echo delay range is within 30?s, the reception quality is only related to the signal field strength.

Long-delay multipath echoes appear more in SFN (single frequency network). In order to effectively cover a large area and make reasonable frequency planning, SFN is usually used to deploy the network. According to the previous analysis, when the two towers are separated by more than 17.2Km, strong echoes with a delay of more than 57.4?s are easily generated, and many dense multipaths introduced by reflections of other objects (such as high-rise buildings and water surfaces) are introduced. Waves often have a situation where the field strength is sufficient but cannot be received normally. This is also the reason why some cities still fail to achieve better reception after signal coverage. In addition, in the process of vehicle-mounted mobile reception, the number and location of echoes are prone to drastic changes, which can easily lead to the inability of the DTMB receiver frame header detection module to be accurately located, which in turn affects channel estimation and timely tracking changes in the receiving environment. Mobile reception effect.

It can be seen from the above analysis that in the complex environment of mobile reception and multipath echo, the accuracy of frame header detection is very important. The GX1501B adopts a frame header detection mechanism specially optimized for SFN, which can accurately locate the strongest signal. The main path position and numerous echo ranges provide the most efficient data for the channel estimation module. The channel estimation module adopts a unique iterative algorithm, which makes full use of the data of each echo to improve the channel estimation accuracy. Combined with the design of time domain/frequency domain joint equalization, the single carrier mode of C=1 is adopted. The multi-carrier mode of C=3780 can provide superior anti-echo performance, which fully compensates for the decline of receiving capacity caused by high-rise buildings, water surface reflections and the introduction of multi-transmitter towers and supplemental repeaters. This also makes the GX1501B the most comprehensive DTMB receiver chip with comprehensive reception performance.