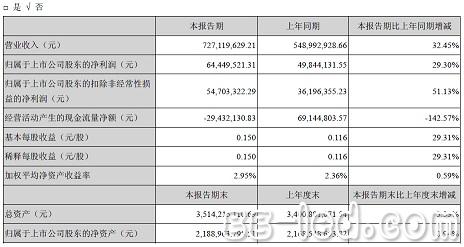 In the first half of 2014, the industry's business climate has maintained a good momentum, and the LED industry as a whole has developed rapidly. The market demand for LED application lighting products continues to expand and the market penetration rate continues to increase, which is transmitted to the middle and upstream packaging and chip fields, and the industrial scale is further expanded. 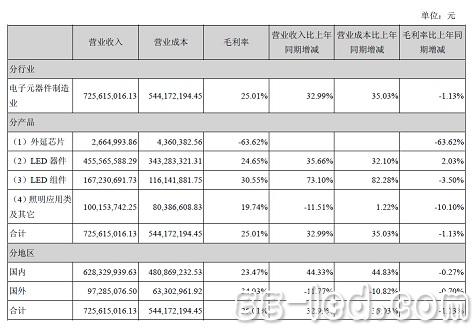 The composition of the main business of Foshan Guoxing Optoelectronics Co., Ltd. in the first half of 2014

During the reporting period, the gross profit margin of LED products, LED components, lighting applications and other main products of the main products was 24.65%, 30.55% and 19.74%.

During the reporting period, the company's key project construction projects have been basically completed and put into use. The project's electromechanical power equipment for the new plant area of â€‹â€‹Huabao South Road has been completely installed, and most of the plants have been put into use, laying a good foundation for further expansion of the company. At the same time, the epitaxial chip project of Guoxing Semiconductor, a subsidiary of the company, has been installed and commissioned since the second half of 2013. The number of MOCVD equipment that has been installed and commissioned is about 15 units. Most of the chips produced are supplied by the company's packaging. Business use.

During the reporting period, the company's brand and channel construction continued to advance. The brand and channel construction projects of the company's super-raised capital investment projects have been steadily advanced. The distributor conferences have been held in Henan, Jiangsu, Zhejiang, Anhui, Shandong and other places to actively expand the lighting distribution channels. Up to now, the company has more than 10 operation centers, 2 direct operations offices and more than 1,000 outlets in various markets across the country.

Guoxing Optoelectronics said that the performance growth was mainly due to the fact that the industry boom in the first half of 2014 has been maintaining a good trend. The overall development of the LED industry is rapid, and the scale of the packaging and chip industry has been further expanded.

For any inquiry, please feel free to contact us. We will follow up and come back to you ASAP.